(Advice)
Packing for a hike is like selecting your armor against elemental. I guess you have some experience of the value of an extra sweater that looked useless at the warmth of home, but I’m sure that none of you would start a half-marathon in a full alpinist gear. Sure, you got no chance to stand against the elementals unequipped, but you don’t always have to take the fight. 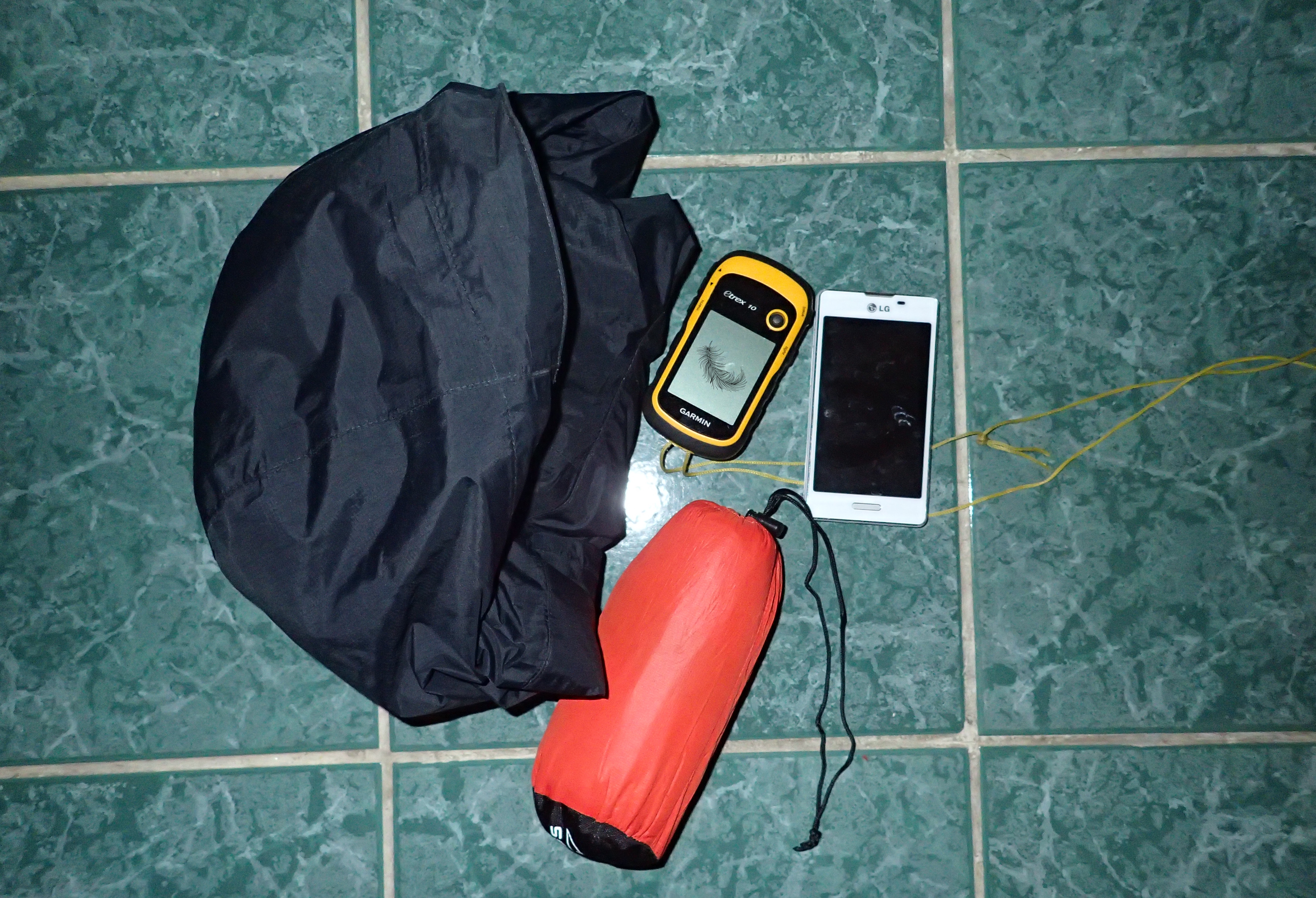 The elemental are not your friends or foes, they are part of the nature, servants of the physics, unconscious, without malevolence, but still dangerous. They can be gentle as well as furious. If you are careless they can destroy you, but unless you are a god or magician, you stand no chance against them. So you can either brace yourself and withstand their power or chose the rabbit style and avoid the fight. A half-marathon for example can be done without refreshing if you are quick enough. The heat might try to overcome you, but you’ll be in the finish before it would really affect you. The same on a high mountain, where you have to prepare for the possibility of an overnight, is simply suicide. But if you go too heavy than possibilities quickly becomes a certainties and your only choice is to endure. 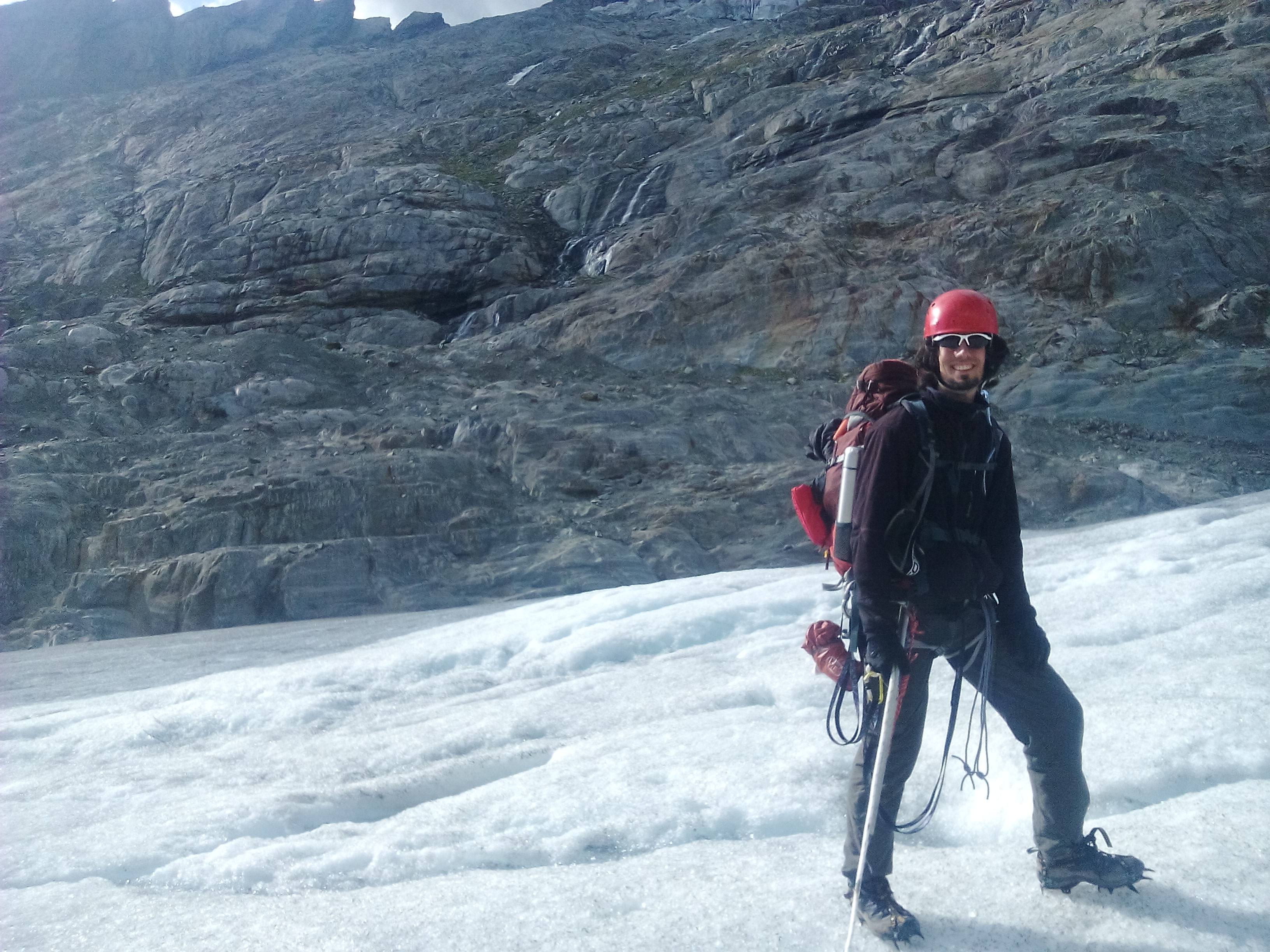 The heavier you go, the more likely you will have to fight the elemental face to face. So choose smart when you are in the armoury, you might need to be a knight in steel one day but a ranger in leather on the other. This time I was packing for a weekend hike on the southern slope of the lower Tatra. A gentle terrain but an ambitious length of 95km (59mi). The light weight was obviously paramount to achieve the goal, so I aimed at 5kg (11lb) when started to pack by bag. Thinking about the four elements (earth, water, air and fire) during the packing might help to prepare for everything even if it is not a perfect metaphor as most of them are not. Earth is the ground under your feet when you are walking and under your body when you are sleeping. It can be rocky, muddy, grassy, icy and so on. You should think about shoes and sleep pads when you are preparing against earth or try to avoid it by chosing a favourable route to walk and a comfortable place to sleep. A knight might take its boots and tent, take the short, hard route and sleep where the night reaches him or her, while a ranger take its fast shoes and go around on the easy, long way, on which he/she can surely reach the shelter. Water is rain, snow and ice, the thin chilly hand sneaking in and making you and your stuff wet. Sometimes rain is unavoidable, so you have to be prepared. But instead of packing a spacesuit you can consider light, technical gear that might get wet but drives water away of your skind and get dry quickly by your body heat. You should always pack a raincoat, and it is good to wrap all your stuff in waterproof bags inside your backpack. Air elemental brings wind and cold, it is a dangerous one, because most adventurers can easily underestimate its power. It can be suprisingly cold out there, even in the summer after the sun goes down or if a storm strikes down. Always pack some warm clothes, even if mostly you will don’t use it. But it doesn’t necessarily has to be heavy, bring wool or synthetic swaters and underwears, they are light and small, but they keep you warm. Fire is heat and light against which you can protect yourself with water, sunglasses and sunscreen or evade it by avoiding the midday hours. Choose wisely how much water you bring, it is heavy but running out of it can lead to much suffer. 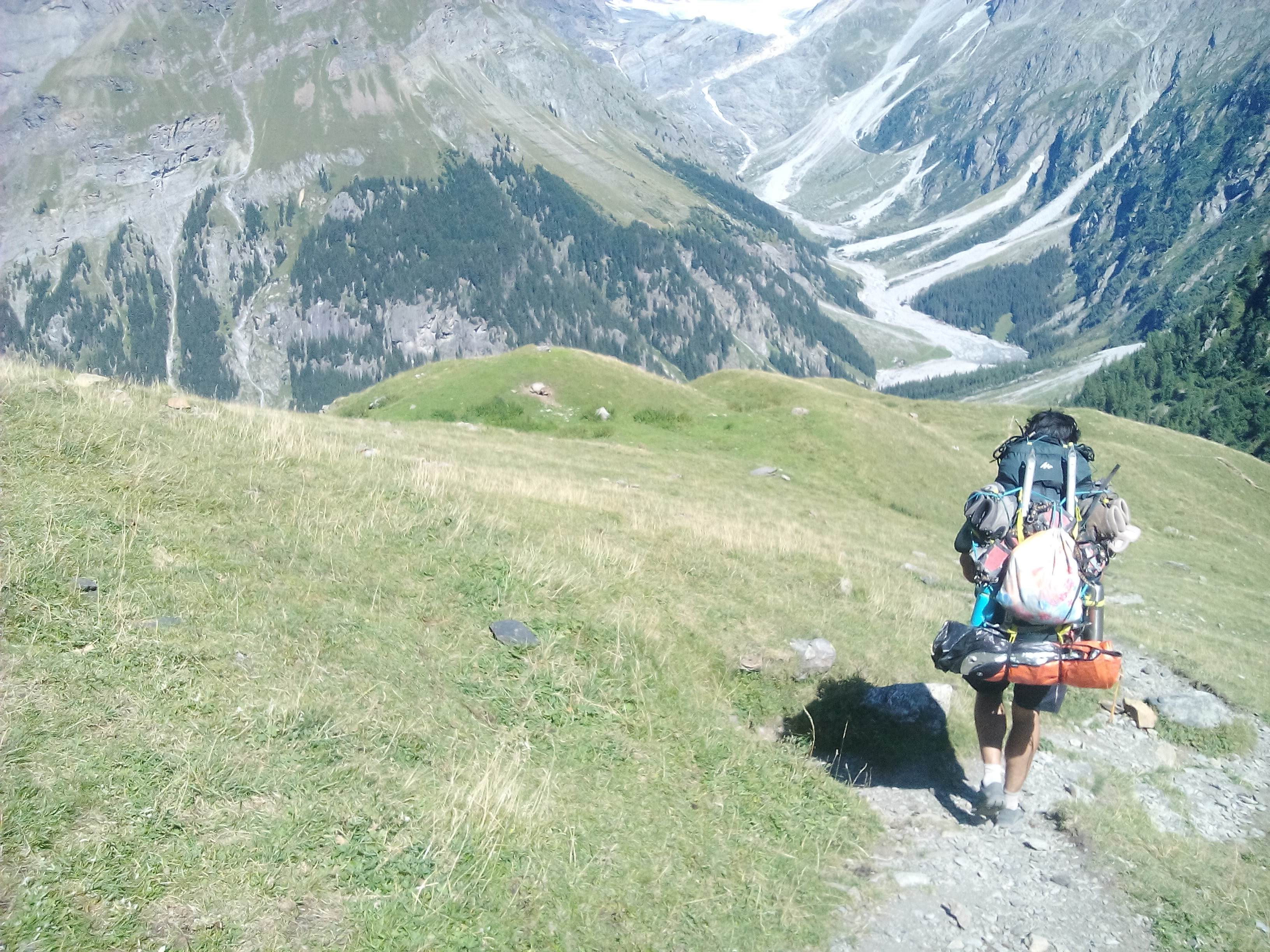 It is tough to be a knight

It was early May, but the temperature was still rather spring-like combined with some summer-like showers. So I could start in shirts from the city, but I knew a sweater will be needed in the mountains. Since I planned to bivy by the track in the forest, I packed my light sleeping bag, a hammock and a small thermo bivy bag. That should have been quite enough against the stiff cold and hard ground, but there was still the flaming heat and the sneaky water that can turn any joyful trip to a nightmare. I packed two bottles of drink and a raincoat and I put everything in nylon bags to have an extra protection if my backpack lets some water in (happened before). It seemed quite all right, not too much not too less, so I grabbed my favourite 35l red backpack, stuffed everything in it and put it on the scale. The digital display quickly adjusted itself as the bag became stable on it and showed 10kg (22lb), which was just exactly the double of that I planned. 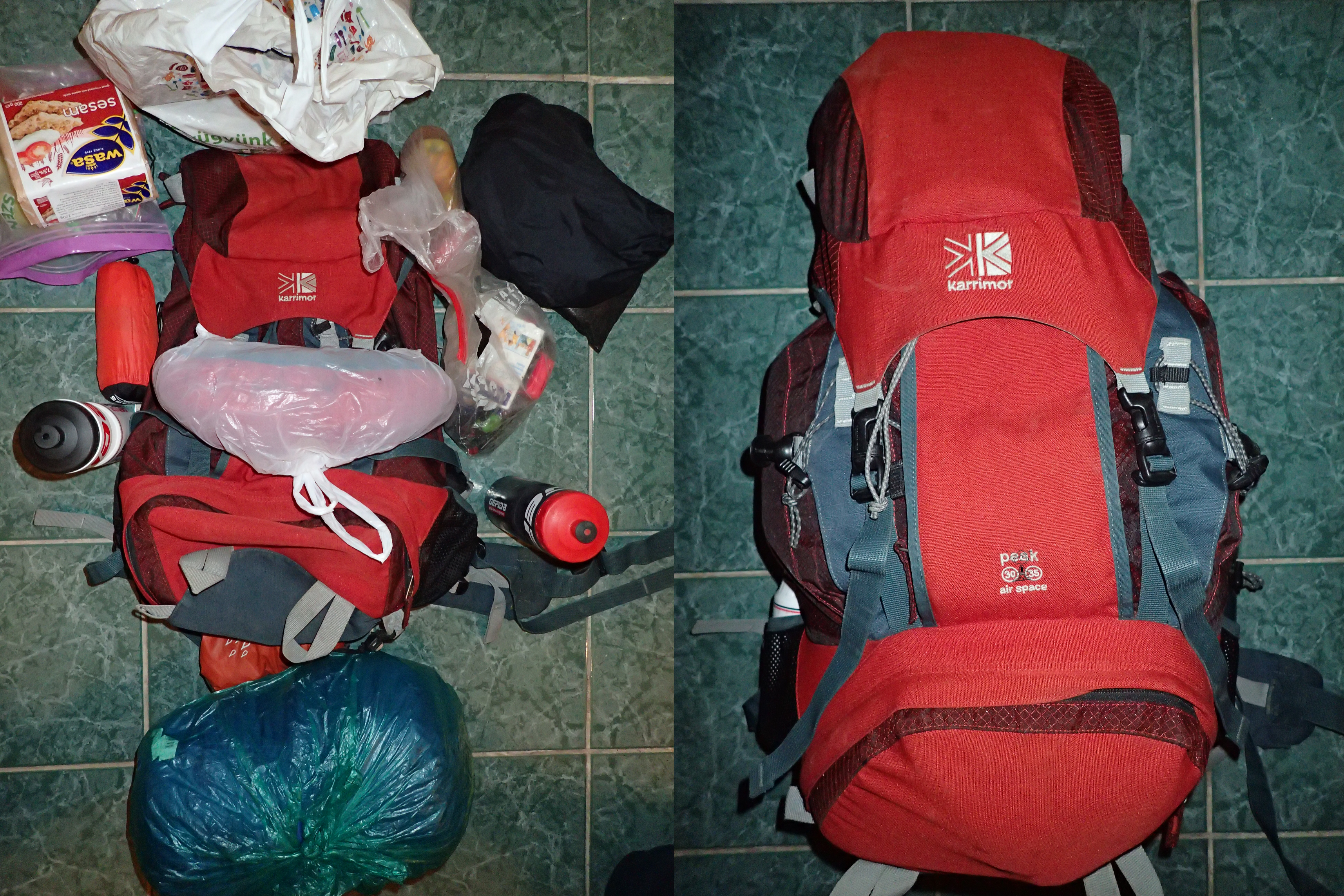 I was quite disappointed, but didn’t accept it. I packed everything out and measured them one-by-one on the scale.

It was quite a lot, but it didn’t sum up to the total of 10kg (22lb), so I measured the empty backpack as well, which was 2kg (4.2lb) on its own making it quite impossible to pack for 5kg (11lb) really. Then came the tricky part: what to leave at home. I was planning for high pace hike but I still had to sleep outside and the weather was uncertain. I didn’t want to count on my luck, I need that frequently enough without deliberately relying on it. So I started to think which element(al)s can I outrun with light weight instead of fighting it face to face. Heat was one them, I checked the map and found some wells along my route, so one bottle of water was enough if I moved quickly. Cold was the other element(al) I decided to trick and I changed the heavy sweater for a lighter wool long-sleeved shirt hoping that I won’t be cold while I walk and I can wrap myself in my raincoat when I stop. It was a good start but still far from my aim. I couldn’t outrun anything during the night, the only thing I could rely on was my endurance, so I sadly put the comfortable hammock aside saving another 1kg (2.2lb) and accepting to sleep on the ground. I also removed the apples from the food pack that was rather treats then necessary food, but still with the backpack 2kg (4.4lb) on its own I had no chance to go below 7kg (15lb). So I started to search for a smaller bag and found an old piece with 20l capacity and 1kg (2.2lb) weight that I got from my girlfriend’s uncle, a great adventurer. In spite of everything I couldn’t leave my Hemingway novel out, because alone in the night before getting to sleep can be really boring out there. I packed in everything and waited for the verdict. The scale finally stopped on 6kg (13lb) making me fairly satisfied as my calculations confirmed that there’s no chance to save more at the moment and I could feel the result of my efforts as I tried the backpack on. 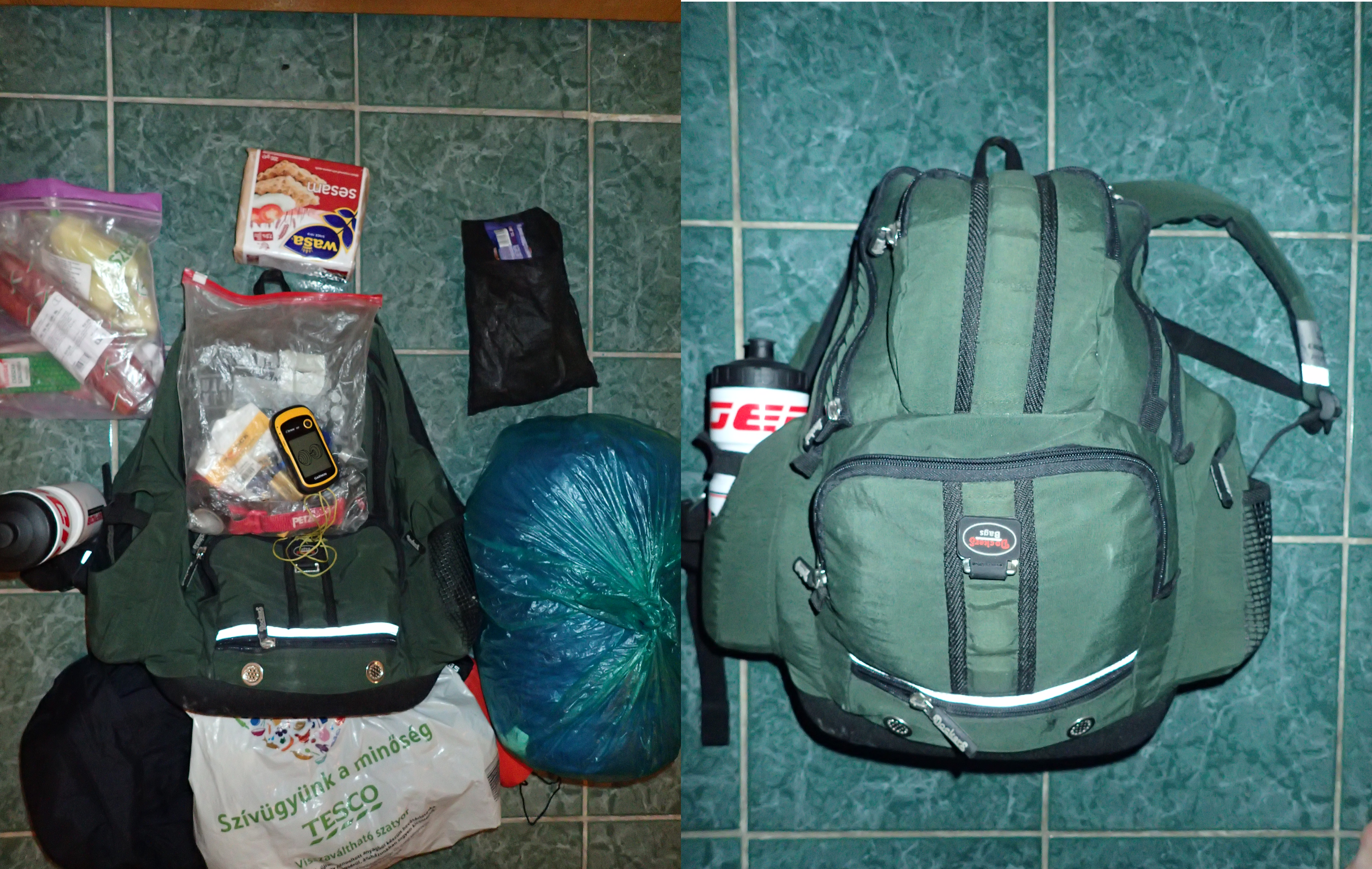 I guess you are interested in how the trip ended, if I got dehydrated in the heat or frozen in a storm, if I could sleep a bit on the ground or could I reach my goal with a 6kg (13lb) backpack. I’m quite interested too, but since I’m writing this on the train to where this hike starts, there’s no one who could tell. But since the sky is blue, the sun is shining, I am quite optimistic. Anyway there is nothing I can do now, so why worry.

One thought on “How to pack light”